Title: The end-Triassic Mass Extinction in the Paleo-Pacific Ocean

The end-Triassic mass extinction was one of the most severe in earth history, and the first to affect a predominantly modern marine fauna. However, due to subduction over the past 200 million years, there are few places where we can study sediments of this age from the open pelagic ocean, making it difficult to understand how the mass extinction impacted the ancient Pacific. In this talk, I will present results from the Wrangel Terrane of British Columbia and the Mino-Tamba Terrane of Japan, two locations where open-ocean sediments have been accreted to the continents. While the end-Triassic extinction has been linked to volcanism from the Central Atlantic Magmatic Province (CAMP), sites from the paleo-Pacific Ocean show evidence for changing environmental conditions beginning hundreds of thousands of years prior to the extinction. Sections in both British Columbia and Japan show evidence for changes redox conditions, nutrient cycling, and primary productivity in the last million years of the Triassic, changes which likely resulted from intensified stratification of the shallow ocean, leading to nutrient stress, periodic anoxia, and changes in the phytoplankton community. I will also report on the first identifications of mercury deposition at the Triassic-Jurassic boundary from a pelagic setting, literally on the other side of the world from the centers of CAMP eruptions. While most mercury deposition in this setting is strongly correlated with sulfide content, the Triassic-Jurassic boundary excursion appears to be uniquely associated with excess Hg, which may be derived from combustion of terrestrial vegetation or sedimentary organic matter. 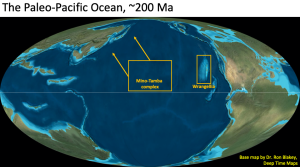